Paramount+ has set a release date for their upcoming YA movie “Honor Society.”

The coming-of-age story will debut on the service around the end of July. Starring Gaten Matarazzo and Angourie Rice, “Honor Society” explores the costs and benefits of being a tenacious, ambitious young woman in the modern world.

Rice plays Honor, an ambitious high schooler whose only goal is to get into Harvard, assuming she can first earn the coveted recommendation from her guidance counselor, Mr. Calvin (Mintz-Plasse).

Willing to do whatever it takes, Honor concocts a devious plan to eliminate her top three student competitors, until things go awry when she unexpectedly falls for her biggest competition, Michael (Matarazzo).

“We’re thrilled to build on our recent success with compelling YA content and partner with Awesomeness Films to bring ‘Honor Society’s audacious story of ambition and empowerment to Paramount+ this summer,'” said Tanya Giles, Programming Director, Paramount Streaming.

“Honor Society” is directed by Oran Zegman and written by David A. Goodman. The film is produced by Michael Lewen and produced by Syrinthia Studer, Ron French and Don Dunn. Film development at Awesomeness is overseen by Fred D. Lee. 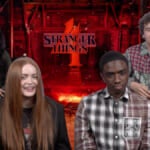 FORT SMITH — Plans for the second Fort Smith International Film Festival are underway, with the River Valley Film Society holding a press conference Thursday to announce details of the summer event and what the “Borderlands” theme means. The first festival received 396 submissions from 43 countries, with more than 130 short films, music videos, […]

On Sunday, July 31 at 2:00 p.m., Chris Van Allsburg, Caldecott Medalist and best-selling author of Jumanji and The Polar Express, visits the Music Hall Lounge in collaboration with Imagine That! exposure. The 2:00 p.m. event includes a discussion moderated by the author with Monte Bohanan, Director of Communications and Community Engagement at the Music […]