Photos of Renée Landuyt
The new Grosse Pointe Historical Society headquarters was designed to fit the aesthetic of the Grosse Pointe Farms community.

The Grosse Pointe Historical Society finally finds some respite.
The staff is almost ready to move into the new 5,000 square foot administration and archives building at 375 Kercheval, Grosse Pointe Farms.
Externally, the plot features new landscaping and cement, including driveway, sidewalks and curbs. On the Lakeview side of the building is an Americans with Disabilities Act compliant ramp, allowing access to all. A wide porch completes the facade, which respects the aesthetics of the community.
“We had to build it so it looked like it fit into the neighborhood,” said Stuart Grigg, the company’s vice president of development.
Stepping through the front door, one is greeted by a wide open flexible space flanked on either side by galleries. Other first floor amenities include administrative offices, a full kitchen and pantry, two bathrooms and a laundry room.
“We used real oak flooring,” said builder Bob Ross of Ross Construction Inc. “It adds to the beauty of the house.”
Thanks to a donation from the We Are Here Foundation, the company already has furniture, which will be placed soon, and hopes to obtain some additional pieces.
The area of ​​the building is divided equally between the public ground floor and the lower level reserved for staff. Although work remains to be completed on the ground floor, it will include a digitization laboratory and archive storage.
Each level of the house has its own climate control, so temperatures can be regulated on both levels, Ross said. Anderson Windows adds to the energy efficiency of the building. 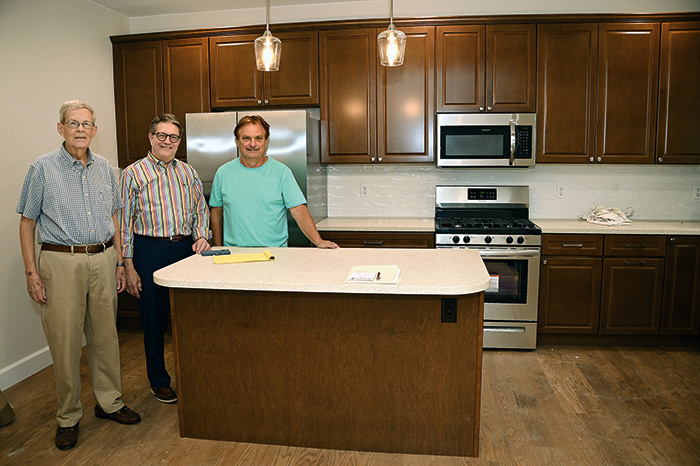 “I’m proud of it,” he added. “Nothing is perfect in the world, but you make it as close as possible. That’s the best.”
The hope is to move the staff in soon and quietly open the first floor.
“We have to get the lower level to a certain point, and then we’ll move across the street, get operations in place, get functional,” Grigg said. “We will start using the first level. Our goal is to get into it the right way so that we are well organized, run smoothly and don’t create new problems.
“We have some quick exhibit opportunities that we can set up, so we can get people in for a reason,” he added. “We are going to launch the digital laboratory, then think about the layout of the collection space.”
When fully operational, the new building will allow users to “spend two or three hours around the story in a way that you can’t do anywhere else in the community,” Grigg said.
“I feel vindicated, satisfied, vindicated,” he noted. “It looks better than I could imagine; it looks like it belongs to Grosse Pointe Farms. I’m excited about what we can do here.

History restored
The society and some of its archives are currently housed in the historic Provencal-Weir house, located opposite the new building. Prior to this, operations were based in a space next to Jerry’s Party Store. Neither offered sufficient space for operations or storage.
“The space next to Jerry’s was 800 square feet, but we didn’t have a table big enough to roll out a shot — and we have 5,000 shots,” Grigg said.
“When we left Jerry’s…we put a lot of stuff in storage and moved all the business into (the PW House),” he added. “We have equipment, but no place to take it out. There is no light here either. 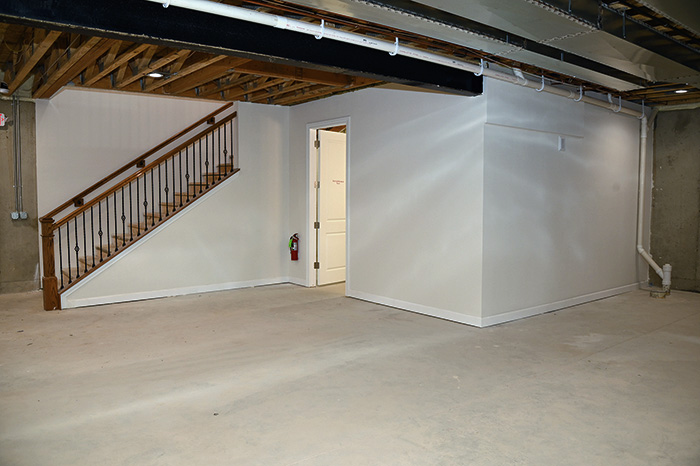 The lower level, when completed, will house
archives and provide space for digitization efforts.

Once the items are moved to the new building, the plan is to restore the PW House into a museum to showcase the history of Grosse Pointe.
“The dream is for it to be a great place for students of museum studies to do internships and help out; it’s a study environment with real purpose,” Grigg said.

Go digital
The company’s digitization efforts are already underway, although the new space will make it easier to achieve.
The plan is to create digital copies of the original documents; pack and store the originals in a secure environment to prevent further deterioration; and using PastPerfect – software that includes tools for cataloging and tracking various collections to help streamline inventory projects, manage digital assets, and share collections online.
“It normalizes everything and makes it easy to share,” Grigg said. “The intention is for them to see us on the web and come see us in person.” 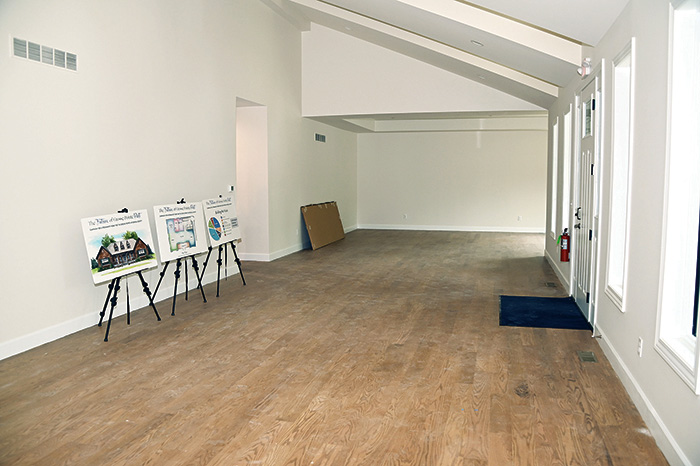 A large entrance will provide adequate flexible space for exhibitions and events in the new building.

A book scanner, acquired with funds from the Ralph C. Wilson Jr. Foundation, allows the archivist to saddle a book, lift and flatten it with a glass plate, and capture both pages with digital cameras. The scans are then straightened and color corrected, then cataloged using PastPerfect.
In addition to the book scanner, the company has a digital printer, flatbed scanner and other equipment, but no space for them until they are relocated to the new building.
“Right now it’s all hand search,” Grigg said of the archive. “It’s cataloged but not in PastPerfect, so not everything is accessible. But in the appropriate lower level folders, anyone can look it up online and then make an appointment with the archivist. We’ll see what we have and we’ll build it. And we make sure it’s there for the next generation. …
“The Grosse Pointe Historical Society has been around for about 78 years,” he continued. “It all started when people in 1945 said we needed to keep track of Grosse Pointe’s history – the vanishing farms and other remnants of 19th century history. Now…that’s stuff of the 20th century that are disappearing.
“It’s the last of the non-digital generation,” he added. “No one wants family albums anymore, but they can’t just throw them away. We hope to be a stopgap for that and get things digitized and on the web. We need to be a trustworthy place to that people bring these things.
A longtime supporter of the society, the Daughters of the American Revolution Louisa St. Clair chapter provided dozens of boxes from its archives — scrapbooks, scrapbooks and records spanning nearly 130 years of history — for the company digitizes them.
“We do work that no one else does,” Grigg said. “That’s not the library’s job. This is not the work of the Detroit Historical Society. Municipalities have no reason to keep (local history). Schools do not have it as their primary mission. Neither did the War Memorial; it is not part of their main mission. This is why we need a forever home.

Community support
Grigg said he was thrilled to be part of the “Grosse Pointe revival.” 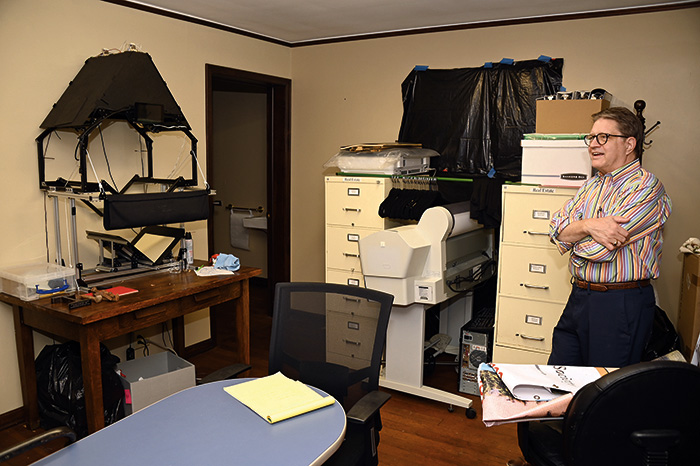 Stuart Grigg, vice president of development for the Grosse Pointe Historical Society, stands in a crowded room in the Provencal-Weir House, where the society is temporarily working until the new building is completed.

The new build at Ford House “is complete and looks fabulous,” he said. “The War Memorial is undergoing renovation. The art center will be built on the edge (of Grosse Pointe Park). We’re right in the middle – relevant and timely.
He praised everyone who supported the company’s dreams of a forever home, but more help is needed.
“We got fantastic support to build this building,” Grigg said. “The mortgage is complete, but we need additional support to finish the recovery area as it should be with the right equipment.
“The reality is that we’re not like a library and we’re not funded by a little tax,” he added. “We don’t have an endowment or huge backers. We have to depend on memberships and fundraising events.
For more information or to donate, email development@gphistorical.org or visit gphistorical.org.

Jon Stewart returns to your screen. The talk show host’s new news series, The problem with Jon Stewart, premieres on Apple TV + starting September 30, and the show’s trailer teases Stewart by tackling all manner of social “issues.” In the 30-second teaser, Stewart can be seen discussing everything from the struggle to comprehensive veteran […]

The Summit Historical Society’s new exhibit explores how the Ute tribe used science and technology. Elaine Collins/Courtesy Photo Summit County residents and community members can learn about Summit County’s earliest residents at the Summit Historical Society’s new exhibit, which showcases how members of the Ute Tribe designed their homes and businesses. other parts of their […]

Fayemi: We will build an equal, responsible and secure society with a speedy justice system | The Guardian Nigeria News

The Governor of Ekiti State and Chairman of the Nigeria Governor’s Forum (NGF), Dr. John Kayode Fayemi, recently decided to throw his hat in the ring to contest the presidency. At a forum with members of the public, civil societies and journalists, he spoke about his vision for a new nation if elected president. MUYIWA […]